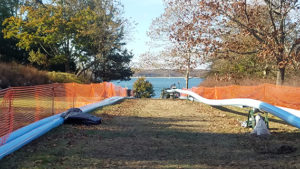 Before Hurricane Sandy hit the New York coastline in 2012, the residents of Shelter Island, an idyllic community at the easternmost tip of Long Island, felt that their power infrastructure was well protected. At the time, Shelter Island had three circuits providing power – one of which was known to be inadequate but provided some back up capability at peak power use. Sandy destroyed one of the two remaining circuits and left the island with no adequate back up circuit. This was especially problematic in the summer months when demand was at its peak.

Long Island Power Authority acted quickly to resolve the issue and obtained the funding and permissions to replace the line under the Peconic River and Pipers Cove using horizontal directional drilling (HDD) methods. The HDD process would be used to install three conduits under the water, each of 3,300 feet long, from Southold to Shelter Island. However, this initial installation was a failure. The original drilling contractor used a high-density polyethylene (HDPE) conduit and attempted to install all three conduits in a bundle in the same 36-inch bore hole which got stuck during the installation. The HDD had to be abandoned, and the project had to be shut down. A new approach was necessary.

There were delays for several years while the failed installation was dealt with and a new plan was considered. PSEGLI brought in one of the premier drilling contractors in the nation, Carson Corporation, to help them complete the project. Carson partnered with Underground Solutions, makers of Fusible PVC® pipe, to tackle this challenging project. Carson chose to use Fusible PVC® conduit because of its superior safe pull force and strength to weight ratio compared to HDPE. With the cooperation of the power company, Heights Property Owners Corporation (HPOC), Shelter Island Town and the Town of Greenport, drilling began in Fall 2016.

At the recommendation of Carson Corporation, three separate bores were performed instead of a single bundled installation. A single 8-inch diameter Fusible PVC® conduit was installed in each bore, approximately 3,300 feet in length. The bores were drilled from Greenport to Shelter Island, up to 120 feet below water body. Of the three conduits installed, only one currently carries an active circuit, while the other two will provide options for future reliability and capacity expansion projects.

In the end, the second attempt at the project was delivered on time and on budget. Thanks to the experience and diligence of Carson Corporation and the use of Fusible PVC® conduit, Shelter Island has the energy capacity and system resiliency needed for the future.

“It was a flawless execution…You clearly put the right resources behind this.” Stella Lagudis, General Manager, HPOC June 2018 article in the Shelter Island Reporter

“In early meetings with PSEGLI, Carson Corporation was determined to reduce the risk. In order to accomplish this, we chose to drill three separate bore holes and used 8-inch Fusible PVC® pipe due to the safe pull force available and calculated pull force needed to ensure a successful drill.”